It's all kicking off - or so it seems.

A wander around a bit of river I've been watching on and off for 15 years now wondering why I've never seen a Mandarin there finally paid off with a couple making a brief appearance from under the willows. I'm sure they must have been there at some point previously but it's a fairly inaccessible spot, so we'll see what happens in the future. 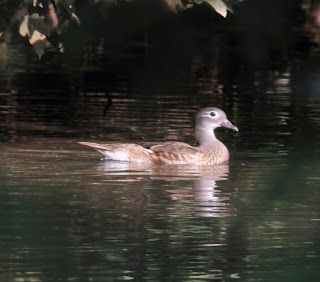 With it being so hot during the day I decided to leave walking the dogs at Broom until the evening, with a bit of a hope that a "funny" gull would turn up. None did, but it was still good to watch the 2 Greenshank, which after a bit of a display flight seemed to head off purposefully south.

I hung about for a bit longer before calling it a night and was just going back over the fence when I heard a Greenshank calling at the south end of GLE. It appeared to come in from the south and was flying low over the water but as I watched realised that it had a VERY small wader for company, that landed on one of the exposed "islands" where all the Lapwing sit. The size alone made me immediately think of a Stint but I didn't want to set off a false alarm if it turned out to be "just" a Sanderling. It was also almost dark, so whatever the case by the time anyone else arrived it wouldn't be possible to see it. All I could do was move along a bit further and try to get as many pictures as possible in the hope that something would turn out from shots with a handheld 400mm lens at 1/60 sec shutter speed. Checking the books back home made me pretty sure it was a Little Stint but I was relieved (and very grateful) for confirmation from Steve after sending him the pic. I should probably have had a bit more courage in my conviction from the start that it was a Stint of some flavour and got the word out but, given the time of day, don't think it made that much difference. A smart little bird to see and amazing to think how far it's probably travelled so far on its journey south. 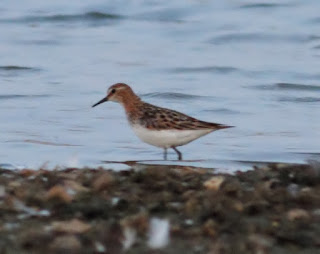