After being stuck in doors with a stinking cold for the last four days it was time for a walk in the warm sun shine. I headed for Broom.

The red-head Smew was noted still on GLW before I noticed a load of gulls sat on the end of Peacocks Island. I shifted the scope round for a squint (they were still a long way off).

Black-head, Black-head, Common, Avocet. Hold on a minute - AVOCET!! Well, that's a nice surprise. It had a little preen and went to sleep amongst the gulls.

I went for a closer look and noticed two Oycs sat at the opposite end of the gull flock, another SFYL bird. Two birds with a few mins.

Not bad after a few weeks of a lean streak. Iphonescoped shot below. 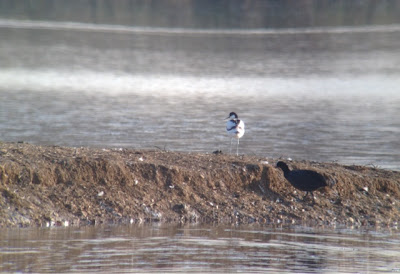