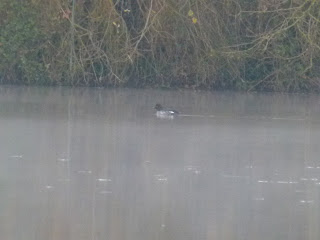 It generally does not take long to count the waterfowl on Poppy Hill fishing lakes. There are usually only a few Mallards, a couple of Moorhens and a family of Mute Swans. Wigeon, Shoveler and Teal are occasional visitors, while Tufted Ducks are more regular. This morning the three male and one female Tufties were joined by a female Goldeneye, the first I have recorded on the patch and my second new duck inside a week - a male Goosander was seen flying west over the pits on 16th November.