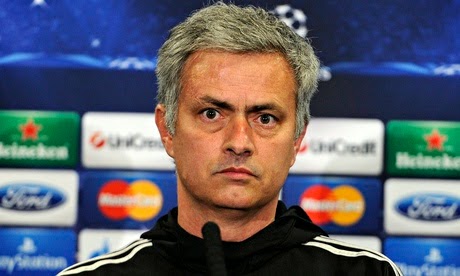 Above: José Mourinho's reaction when asked if DOM could maintain his challenge in the SFYL Championship.

In an exclusive interview with Self-finders' Digest and several hundred other quality periodicals and blogs throughout the English and Portuguese-speaking worlds, Mourinho gave his opinion on the chances of the key SFYL players, as we approach the crucial spring migration season.

In his trademark broken English, when asked about DOM's chances, Mourinho's opinions were surprisingly reminiscent of his thoughts when asked if his Chelsea team could win the Premiership.

''The self-finding table is fake'' he fibbed. ''Look behind...big players are close...and if you think I use the words 'behind' and 'big' in the same sentence and am thinking of 'someone'....well, you would probably be wrong.'' he further untruthed.

''These are big players, big champions, big characters, big personalities, big lists.'' he monotoned. ''Look at Senhor Palmer - he has been self-finding birds in Bedfordshire since the late 19th century, I think. Big experience. He know that marathon is not won in first 100 metres. He also know that marathon is not a chocolate bar.'' he snickered.