Two more nice SFYT this weekend, neither of which I got last year.

On Saturday I got out at first light and having seen the two well-watched male Scaup at Brogborough and found nothing of any interest in a look at the Pillinge, Stewartby or Quest, I had more luck again at Chimney Corner South when my third male Scaup of the morning was found swimming around not far off the shore from the watchpoint with the Tufties. Back home for elevenses and some brownie points remained in the bag. 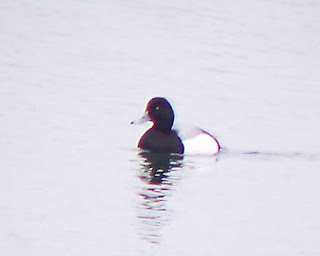 A nice bright one of  my own (above), much much better than the two sleepy ones that I twitched... (down below) 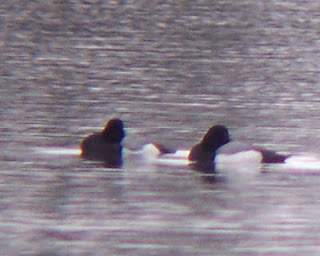 So Sunday gave the chance to go looking for some redpoll sp to scrutinise and I thought I would give Flitwick Moor area a try, lots of Siskins about but only a handful of redpoll found, all pretty standard ones too. Highlight though was a female Lesser ‘Pecker in the treetops of the wood itself which called a couple of times and was then found and lost and refound again on three occasions as it fed and flew in the uppermost branches around the central drain. And home for more elevenses…
Posted by Andy Grimsey at 20:55