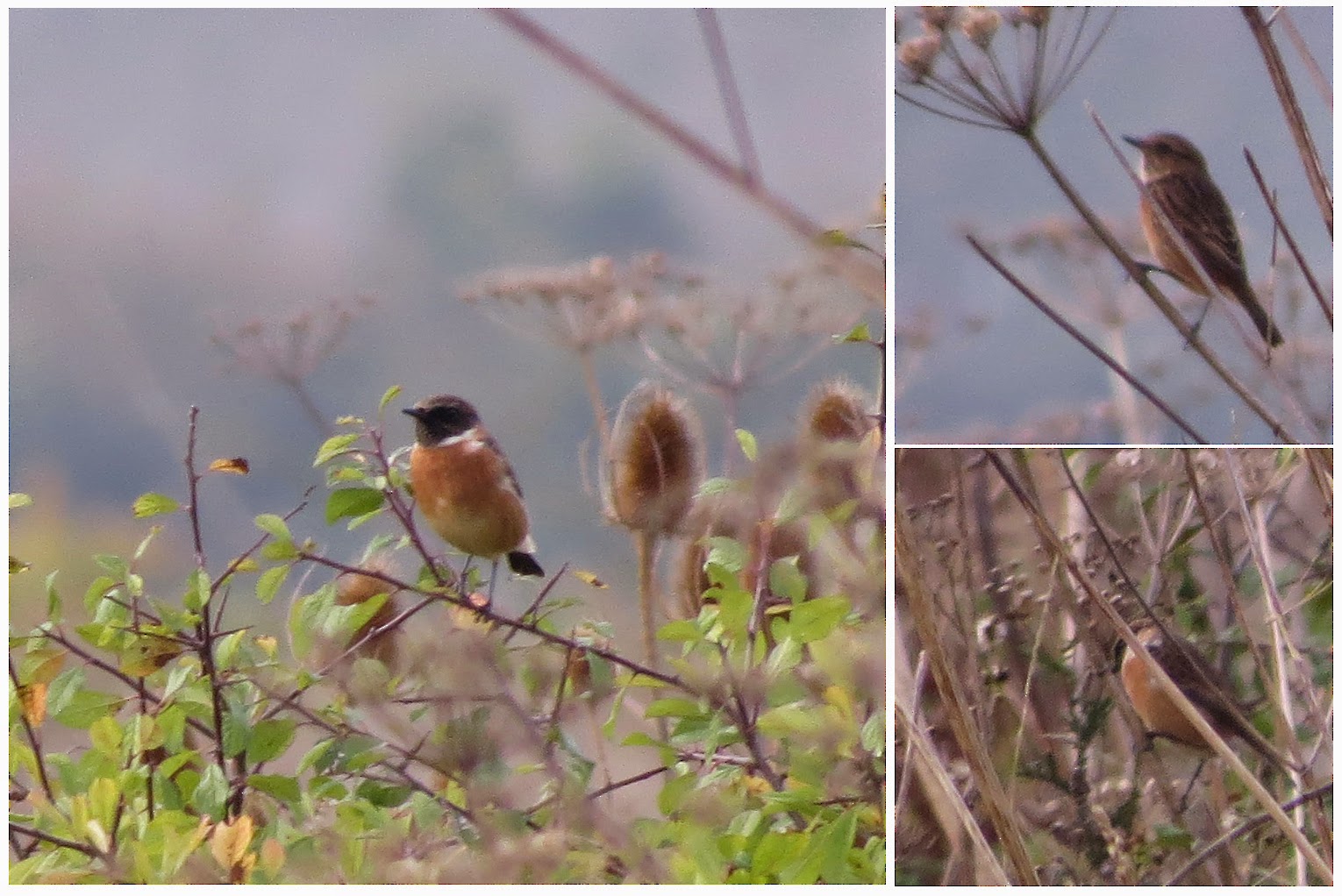 Two different chats this week. Firstly a chat with the top Beds listers at the Barred Warbler twitch Saturday morning, only my second Beds twitch of the year following Glossy Ibis. I had not intended to be out Saturday as it was my wedding anniversary and I had committed to staying home...mmm. Secondly, a jump on the Stonechat bandwagon with the discovery of a group of three at Brogborough Tip on a Sunday morning scout around some pits (all three pictured). Great to see these are back in force after some barren years, only found one individual in both of the last two years.
Posted by Andy Grimsey at 21:17 No comments:

Email ThisBlogThis!Share to TwitterShare to FacebookShare to Pinterest
Labels: Stonechat

Waiting for the autumn big one

Poking around Pegsdon Hills area again looking for something with an "I've been to Spurn" anklet. Just the usual unfortunately. To maintain the image quality on the blog, here is a hand-held, declining evening light, phone-binned Whinchat from mid-week as there was nothing suitable to snap today. 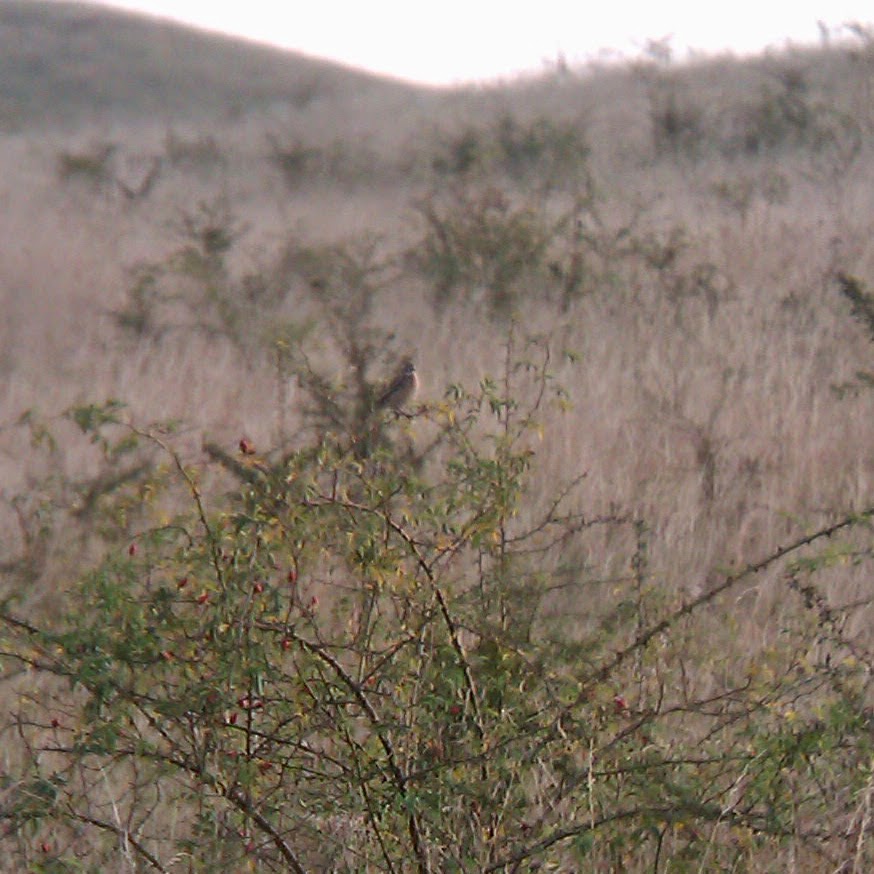 Posted by Andy Grimsey at 18:04 No comments:

As there appear to be new rules, I am going to shamelessly claim the Broom GLE Ruff as self-found, as 'according to my sources' no one had seen it for at least ten minutes. Also, can anyone say with 100% certainty that it was the same bird? ;-)

Looked at the cracking Yellow Wag flock on Biggy Common this lunchtime - its up around the 55 birds mark!  As I was there I thought I'd just check the fencelines for errant chats.  BOOM!  A Whinchat and a Stonechat together.  Nice.  I think I can claim the Whinchat as 'new' as none have been see there for the last couple of days according to my sources.
Posted by Steve Blain at 13:26 8 comments: 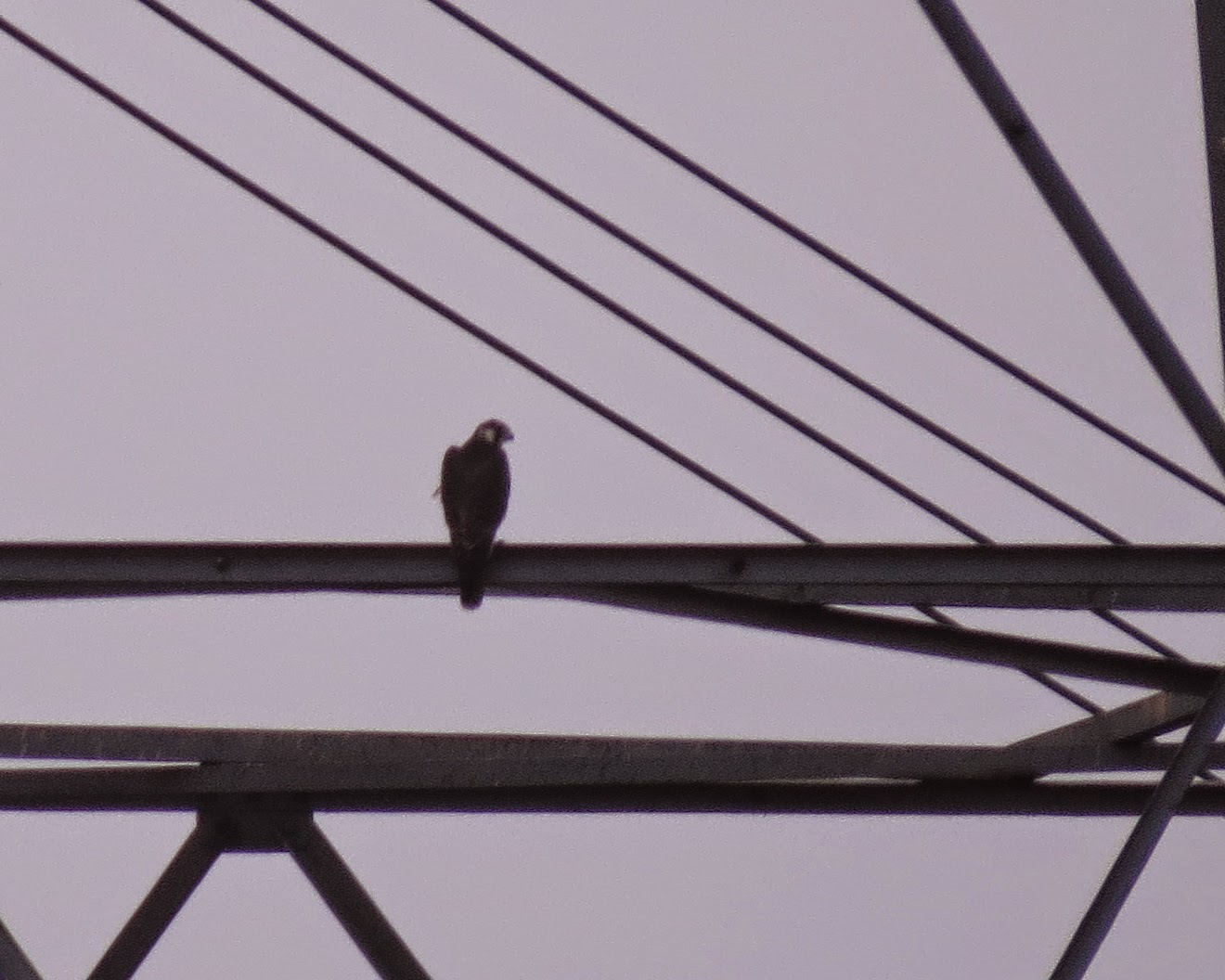 After quite a few short dips into suitable habitat over two weeks, a Whinchat finally came my way at Sandy Smith. They seem to have been hard this year and those found on the hills near Luton seem to be around field hedgerows rather than on the fences, slopes and dips themselves where I have found them previously and where I have been peeking in short spells before and after work. Also expected each year, a Peregrine on a pylon near Streatley was the first I have found this year, all other sightings relating to the Stewartby "chimney" birds. Other than Med Gull, I am now running out of targets so it's all down to the right place, the right time and watching the weather forecast for the run-in.
Posted by Andy Grimsey at 14:51 No comments:

Email ThisBlogThis!Share to TwitterShare to FacebookShare to Pinterest
Labels: Peregrine

Scored a couple more with SCB this lunchtime. A f Marsh Harrier over Broom and an eclipse drake pintail at GLE. Steve trying here to phonescope a flying raptor... 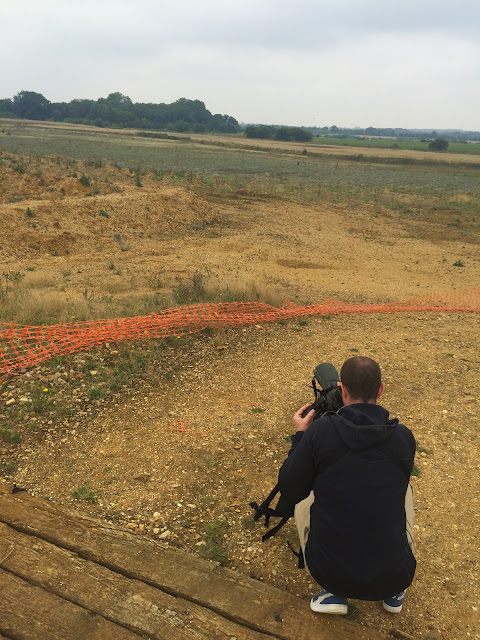 Is it tickable? Taking the below into account - I'm afraid that yes, it is, much to my disappointment. ;-)

Time Category 1: highly transient species. These are species which are almost always on the move. When individuals are seen, they usually disappear fast. Once disappeared, you don’t really expect them to re-appear in the same place. We therefore reckon you can count these species TWO DAYS after a sighting at the same place.

Time Category 2: Medium transient species. These can be counted FOUR DAYS after a previous sighting at a given site.

Time Category 3: Everything else. Most species can occasionally disappear for long periods, and then re-appear at the same site. Your birding behaviour will change if you’re at a site where you know a rarity was present recently. You’ll be specifically looking out for it. It wouldn’t be a pure find. We therefore think that SIX DAYS is a sensible time period before you can count one of these species.

IMPORTANT NOTE: In some cases, long-staying rarities may not be reported very regularly, for example wintering ducks on remote Scottish lakes. Discretion may be required in these cases, but generally speaking we think a gap of at least a month is required before a sighting of such a long-stayer could count as a self-find. For rarities that return to a known site each year, the first person to find the bird in a given season can count it as a find.

If you find yourself in situation 2, you need to check the Distance Re-finds categories to see if you’ve got a self found tick.

Distance Category 1: Large and mobile species. You’d probably start scanning the sky as soon as you hear one of these species has been seen nearby. Consequently your birding behaviour has changed, thanks to the news. There is an extra complication here: many of these species follow the coastline when migrating, making it possible to track their movements along the coast. On a given day, it may be possible to "pre-emptively twitch" a bird by guessing a point on the coast that it will pass.We therefore have two thresholds for claiming these species as self found: for birds which are being tracked along the coast (i.e. seen previously at another site or sites on the day of your sighting), you must be at least 50km from the most recent report. For birds that are not being tracked along the coast, you’ve only got to be 25km or more away.

Distance Category 2: Intermediate species. Again, these species may follow the coast when migrating, though they are less predictable. The threshold for counting birds that are being tracked along the coast on the day of your sighting is 25km, and 10km for other records.

Distance Category 3: Small, cryptic and less mobile birds. For the species listed here, we reckon 5km is enough to constitute a find, and they are almost impossible to track along the coast so that situation is irrelevant.