Had an interesting fight with SCB about SFYL criteria at lunchtime today. Sorry, did I say 'fight?' I meant 'chat.' ;-)

Ultimately, the conclusion we reached was that he is right about what is tickable and what is not ..and so am I.

But for the purposes of this challenge, he is right. If I wish to be a purist and play with myself, that is my prerogative, but can I please do it in my own time.

For background, refer to:

I have been agonising over what to do with this bird throughout today, then this evening, Steve tells me that Glaucous Gull is not even a description species. I find this bizarre but I do not make the rules. I would want a description from me.

When I 'find' a 'tricky' or description species, my thought process is, ''Am I happy with it?'' In this case, the answer is yes. My next question to self is ''Would my description get past a Rarities Committee?'' In this case, I thought not, so I would then enter the record in my own personal database (in this case BirdTrack), then forget about it. However, having shown S my notes this evening, it would appear it would be satisfactory.

I even described the bird as 'being like some bloke who has put a bit of weight on around the middle and so pulls his stomach in and sticks out his chest to compensate.'

So gentlemen, I am afraid that in keeping with my new existentialist finding guidelines, Glaucous Gull goes officially onto my SFYL.

You win some, you lose some...

Self-found in more than one way...

This afternoon, an event occurred whereby my firmly-held existential belief that 'the world is essentially meaningless' was called into question. It was very brief, however.

The fundamental tenet of existential philosophy is ''to live one's life with clarity; be true to oneself and to never draw blood.'' That is how one makes sense of life in a meaningless, futile and utterly absurd world.

(I hope we can all agree that the random collision of random atoms a few billion years ago does not endow upon the universe any innate sense of purpose or direction. Ergo, the world is meaningless).

With this in mind, my list will be based upon existential principles, (although I cannot promise not to draw blood). ;-) So the following species come off, for the reasons stated.

i) Mediterranean Gull - a joint find with SCB
ii) Goosander - as above
iii) Goldeneye - as above
iv) Cetti's Warbler - I understand that Warren Villas was the site where Cetti's actually speciated from the locustella warblers.

With regard to i-iii, there is a good chance I will find these, and of iv, they will be like Little Egrets before too long. We should be looking for others along our river systems. I will also discount anything of which I have the slightest suspicion in terms of provenance and if I suspect the same bird has been seen at nearby locations or by other observers.

I am not 'in it to win it' but instead to provide myself goals and targets and give myself certain health benefits. We all have our own definition of the rules, none more or less valid than the next man's. Now I've purged my list and set out the boundaries, it is almost cathartic.

The classical existentialists would have loved 'self-finding.' It would work on so many levels! 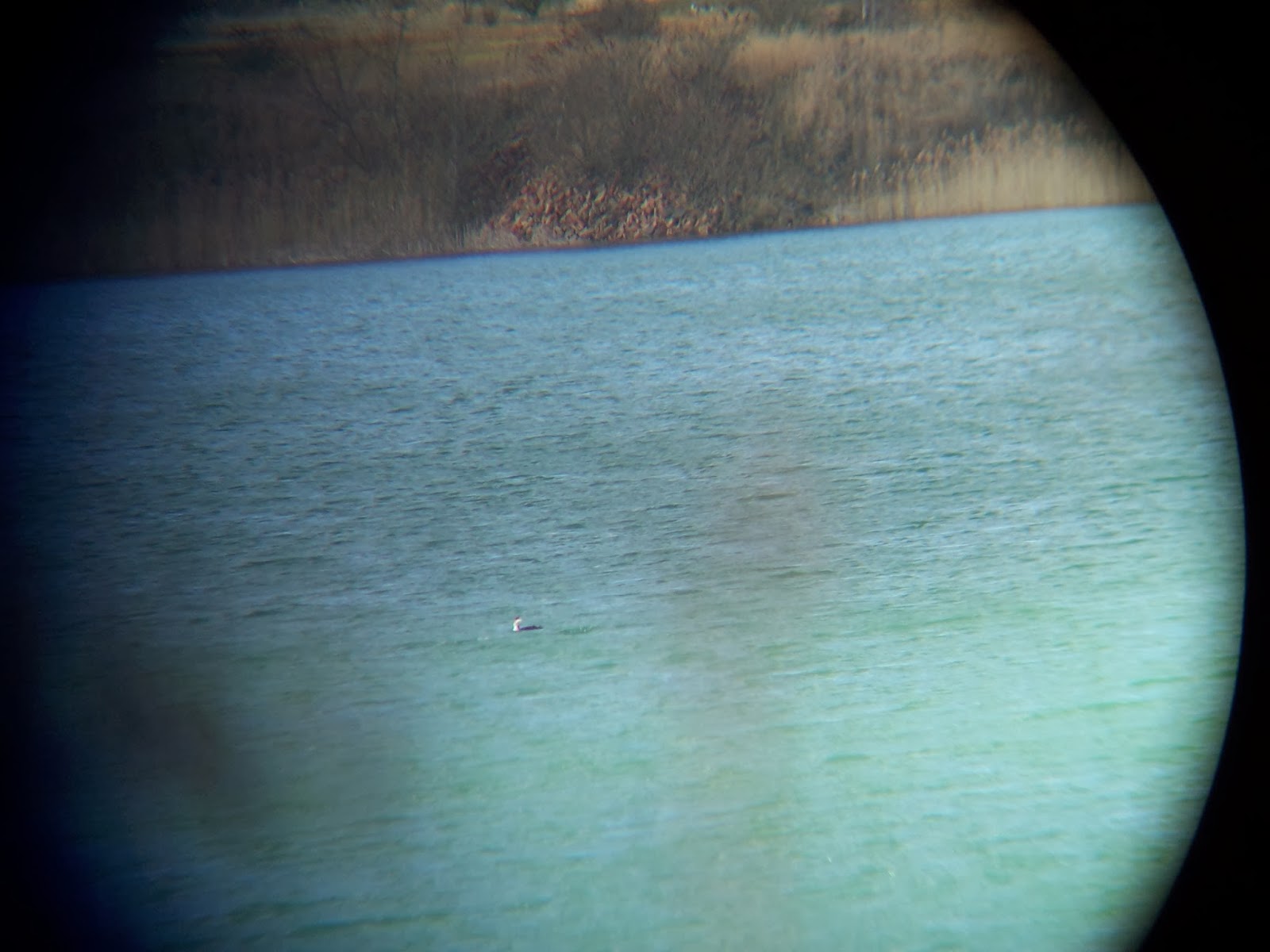 No idea whether this may be the Stewartby bird that has relocated or not, but a Great Northern in Chimney Corner South this morning is my first ever self-found diver sp. in Bedfordshire. Also this morning found my first Oystercatcher and Ringed Plover (Rookery South) for the year and two Bearded Tit pinking in the reeds of the MVCP complex. With sunshine as well maybe spring is not really too far away.
Posted by Andy Grimsey at 22:05 1 comment:

Bit colder than I expected when making a 20 minute walk from a country layby to a game strip and back in civvies and boots this morning pre-work, but female Brambling located and one more in the bag and a species that has not been easy yet this year
Posted by Andy Grimsey at 20:03 No comments:

Finally, a half decent SFYT with a Stonechat (rare bird this winter) on the airfield. 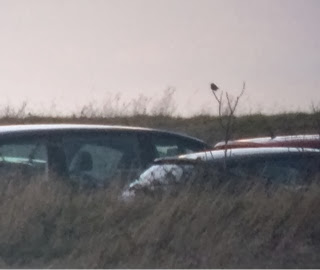 My Wybo WeBS count this morning was bland.  Nice to be out and about at dawn though.  A Cetti's Warbler was singing down the river near Little Barford.  They have been in the area for several years now.
Posted by Unknown at 19:45 No comments:

Still finding things a little slow, but perhaps expecting too much, I called in to Grove to complete my WeBS count. Nothing out of the ordinary until a fly by Ringed Plover did a circuit of the lake before leaving to the s/west. I only managed one of these for the SF last year, so a pleasing addition
Posted by JOHN LYNCH at 21:39 No comments:

I pass this tree on my way to work.  Occasionally over the last two or three years, there is a Little Owl on it.  I've seen it several times this year but don't count it as a selfie because it is a bird found in previous years.  But today there were two.  So I'm having it. 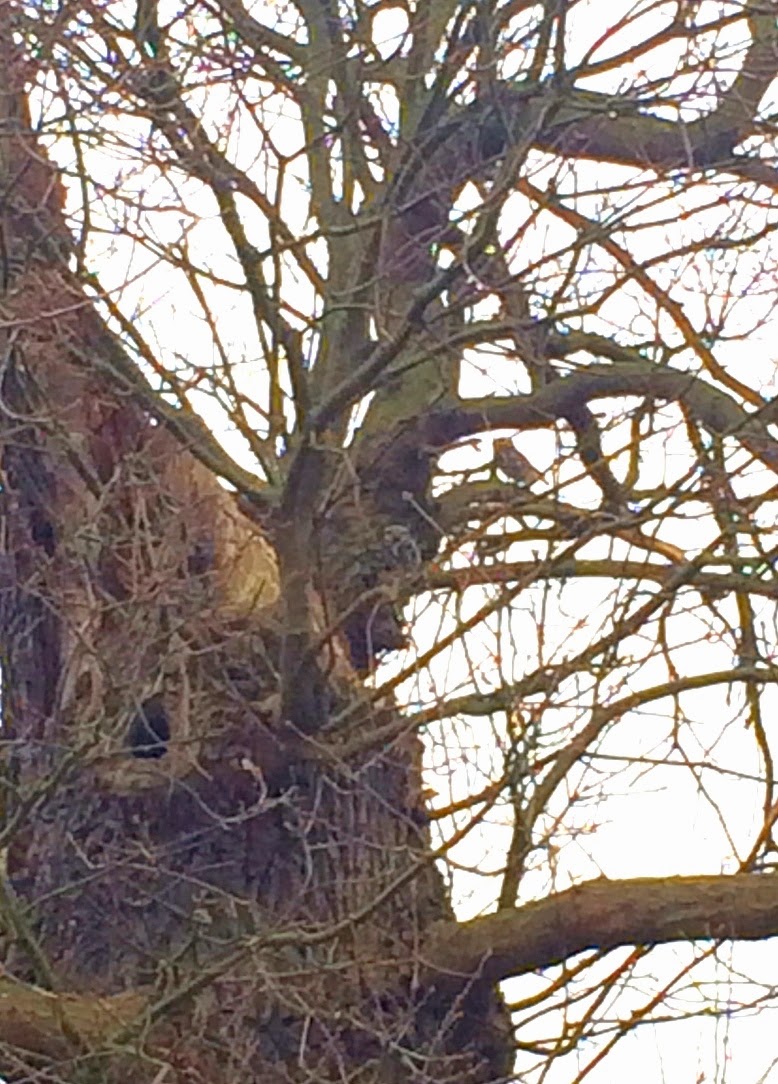 Just a query aimed mainly at the SFYLPD (Self-found Year List Police Department)-
Is the afore mentioned species 'selfable' over Southill Village? Clearly part of the ever-growing Shuttleworth/Southill Estate population..............................and therefore, would a long distance view from Broom GPs be applicable?
Thank you for your time,
Matt Burgess, age 41 of Upper Caldecote
Posted by Broom Birder at 15:20 2 comments:

Not adding anything to my SFYL for almost three weeks due to
the very pleasurable demands of being a new Grandad, I need to
kick start my list. Whilst out for a walk today around East India
Dock Basin we stumbled across a fabulous adult Iceland Gull,
I'm hoping it will prove to be a good omen for better things to
come for my Beds SFYL.

Birder gets Bittern while trying to get a Shag

Sounds like one from the tabloids...
With wind and rain around this week, thought best to look at some water again this morning. I got very excited about a bird that looked like and behaved like a Shag in the choppy water by the reeds on the distant side of the Pillinge and went for a quick walk round to get a proper view. Could not refind the bird but was surprised to disturb a Bittern from within reeds near the newly constructed hide which flew over the water and disappeared towards the corner where the old hide sits. Bumped into Mr Northwood and seems most likely that the "Shag" was a looky-likey Cormorant that he described and which he had similar initial thoughts about last week, and which has a Shaggy jizz too (small and springy in the dive). Worth keeping an eye out though,
Posted by Andy Grimsey at 13:27 5 comments:

Did Gadsey Brook this morning. One hoped for SFYT with Shelduck.  Added Barnacle, Barn Owl and Green Sandpiper. And then there was this on the flooded Willington goose fields. Bling hidden but it's there and the first two letters are ZW... 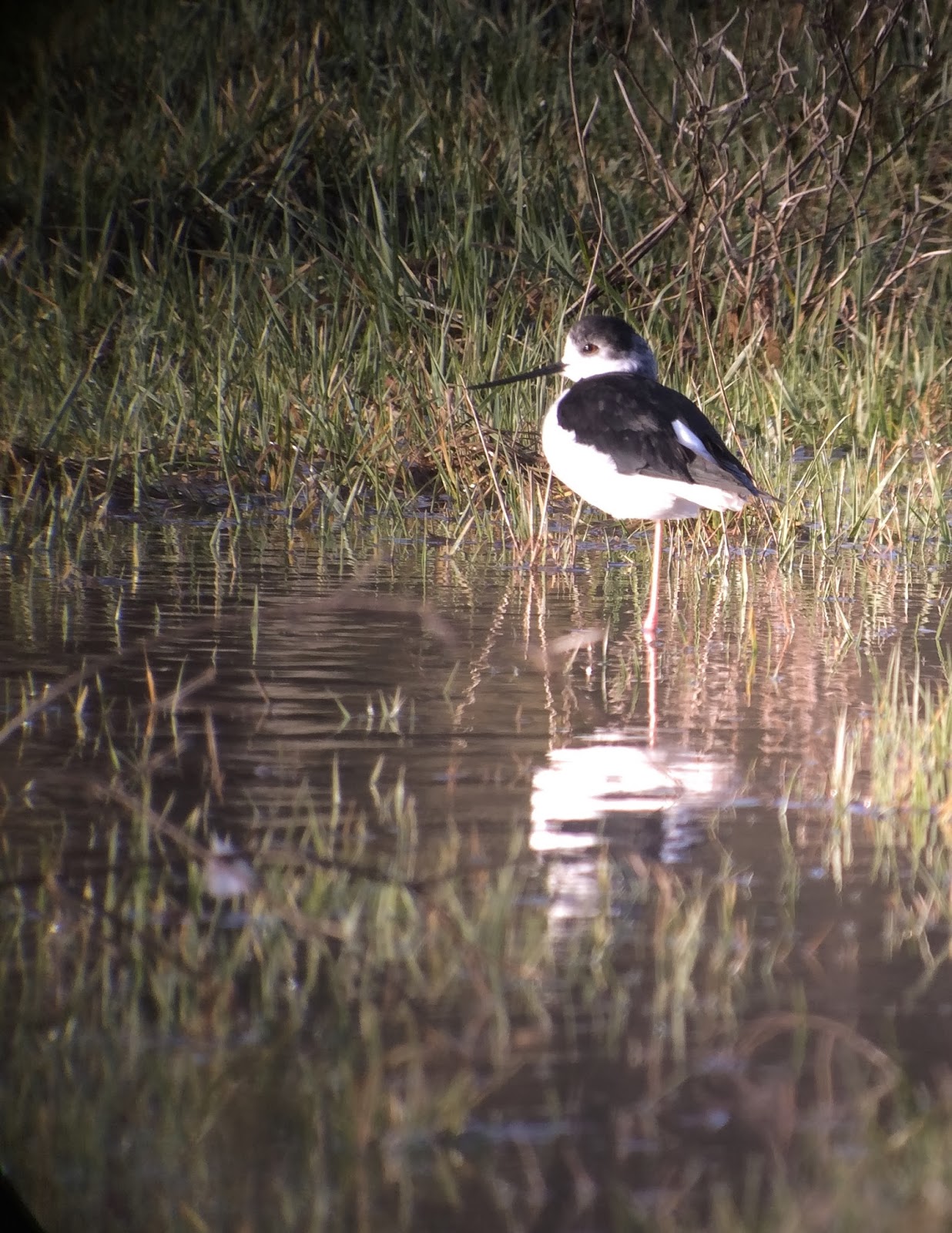 Carbon-free; The Legend of the Trusty Steed

In the last post 'its all about carbon-free really' was mentioned. Well, this has been my ethos since the conception of SFYL'ing way back in 2012. (was it really that long ago!).
So with a fully refurbished bike, I set about the task once more. Unfortunately time constraints do hamper my progress in these competitions, but a willing competitor I am nonetheless.
My last couple of trips out have been fairly flat really, 3 hours around the villages to the SW of Bedford yielded very little apart from a stitch! I've found no finch flocks of note, no Woodcock and despite looking around all the rough areas between Beeston and Upper Caldecote; still no Stonechat- for the 3rd year running.
Today at Broom, the Ringo was still present, having already been 'selfied' (if that's a word?) by SCB. But then some light- just as I was about to leave, a Peregrine loomed up over the G&M Pits and drifted slowly south towards Broom. A half-decent selfie at last.................

Well, now that Mr Hicks has added his very impressive "local birds for local people" total in, I can see I'm languishing somewhat.  Martin (who usually gives up after April ;-), is leading, thanks to basically going birding a lot and finding a handful of pretty good SFYL species.  Keep it up MJP!

I did add a species today in my first bit of birding.  A Grey Wagtail over GLW.  Not able to count the nearby Merlin and Ringed Plover of course.

Darren is doing his usual, "Walk and ye shall find" technique and doing very well.  SCB?  Well, he's doing alright too with some good birds already.  And one does have to watch John L down south.  Not a bad local patch...

Mr Grimsey looks to be repeating his 2013 policy of actually going to some good birding sites rather than just complaining about Luton.  This does work, although you can still complain about Luton...

And then there's Matt...

As Darren said to me last week, its all about carbon free really and at least I've done a few miles on my bike and have a reasonable CF total. 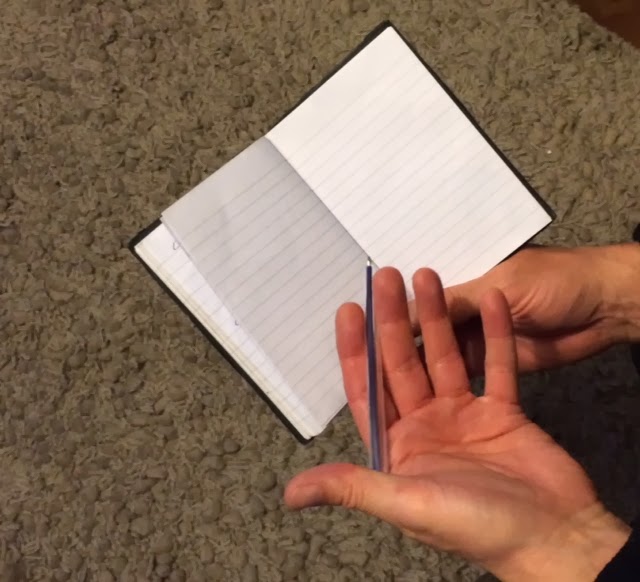 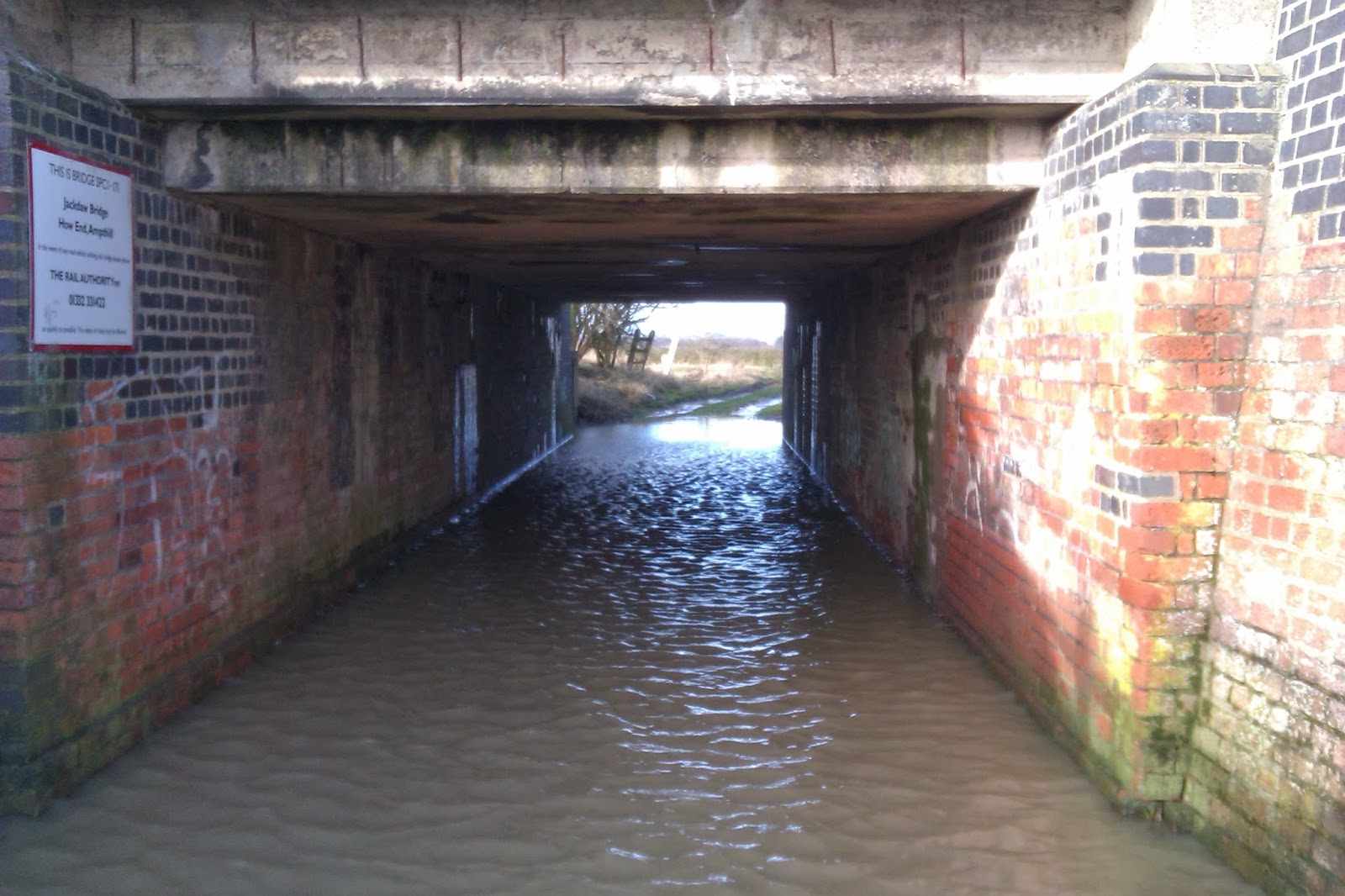 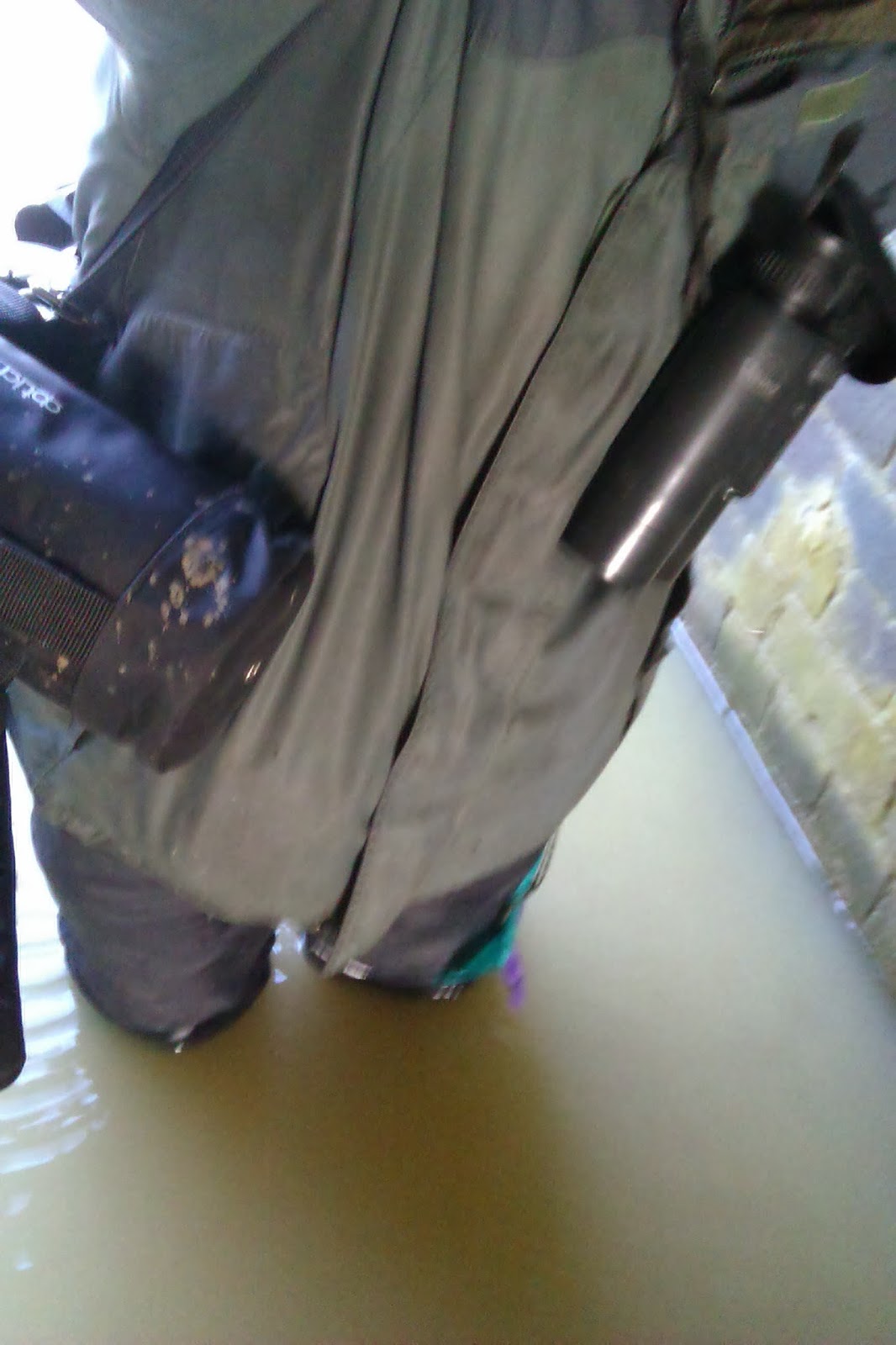 Unexpected wader...
Not that shallow - on tiptoe as the cold water got uncomfortably close to the unmentionables.
The top of my wellies are some 15cm under water

Rookery South looking good again for a while - no unexpected wader here though, just Lapwings.

Bonus was a new Cettis site for me at least with a bird in the reeds to the left of the photo, my fourth of the weekend after three in MVCP on Sat morning.
Posted by Andy Grimsey at 20:36 2 comments: