Avoiding the tired idiom, it is not that 'time flies' - time stands still...it is we who rush through it.

Marsh Harrier and other observations...

Yesterday, I found my first Bedfordshire MR since 17 September 2008; the last one was during a crazy ten day period when I found four locally. Was that really six-and-a-half years ago?

Blog photo of the year so far for me is Matt's, which lends itself perfectly to a caption competition - Upper Caldecote 'Red' holding Rhode Island Red. Apologies for combining politics with domestic fowl...I guess you could call it 'poulitics.'

This year looks like being a straight fight between AGr and RIB. They really are the Lewis Hamilton and Nico Rosberg of the 2015 self-finding circuit. I am more of a 2015 incarnation of Daniel Ricciardo - very quick over one lap, but ultimately disappointing over the race distance.

AGr has some serious blockers on his list, and RIB is bound to find three or four scarce species at Meadow Lane. But my money is on MB finding a rare wader at Broom - Black-winged Stilt? Also, MJP to find a Sabine's Gull at Stewartby.

Digressing, Sabine should be pronounced Say-BIN, not Say-BINE, as it was named for Sir Edward Sabine, not the Sabine Hills near Rome nor the (in)famous painting by Rubens. I for one had been pronouncing it incorrectly for years.

Not an SFYT for me having bumped into a pair in the brick pits in early February, but certainly felt like it as this looks a totally different to the drab winter plum on a dull day... Superb summer male Stonechat on Warden Hill Luton on Sunday 22nd March. Could not find a Black Redstart unfortunately ! 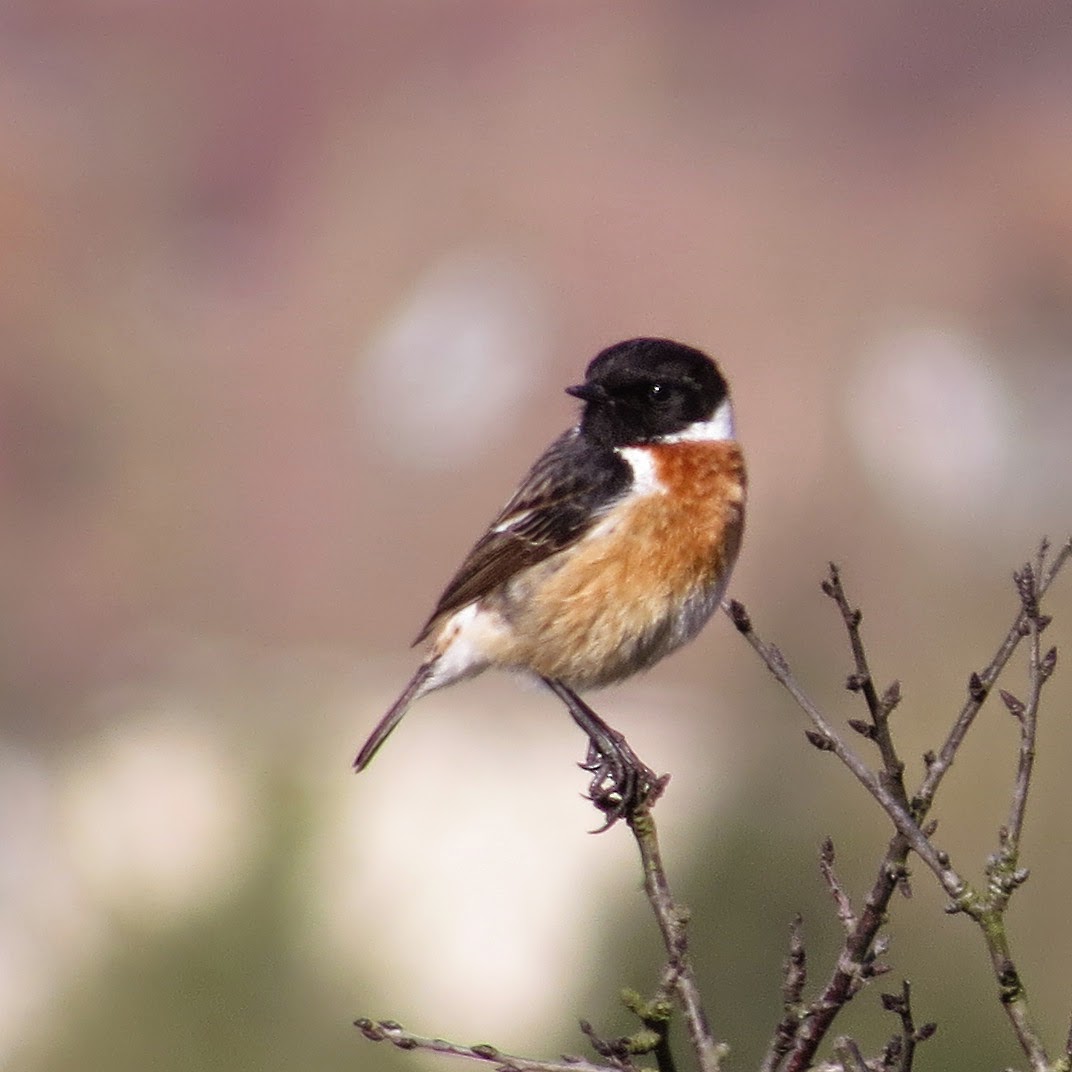 Email ThisBlogThis!Share to TwitterShare to FacebookShare to Pinterest
Labels: Stonechat

I am well off the running again, puffing and panting in the lower middle order. But its all the more sweet when I actually see something at Broom that hasn't been seen by 10 other birders first!
Visits have been fleeting and infrequent this year as I save up valuable brownie points to get the Spring passage birds when Spring really kicks off. Though admittedly, now you can fall out of your car and watch birds at GLE- the task been made much harder.
A male Wheatear and a presumed newly arrived Chiffchaff were nice to see.

But my pictorial offering has come in the form of a long range shot of a Dunlin- none have been reported at Broom since last week, so I think this one is Bona Fide!

STOP PRESS!- I managed to catch a female Rhode Island Red in the garden too! I can see its going to be a passage filled Spring!

A dawn raid on Meadow Lane didn't provide much for me but following sightings of the odd, regularly reported Dunlin/s at Broom last week, there were two at Meadow Lane this morning, taking me to three figures. 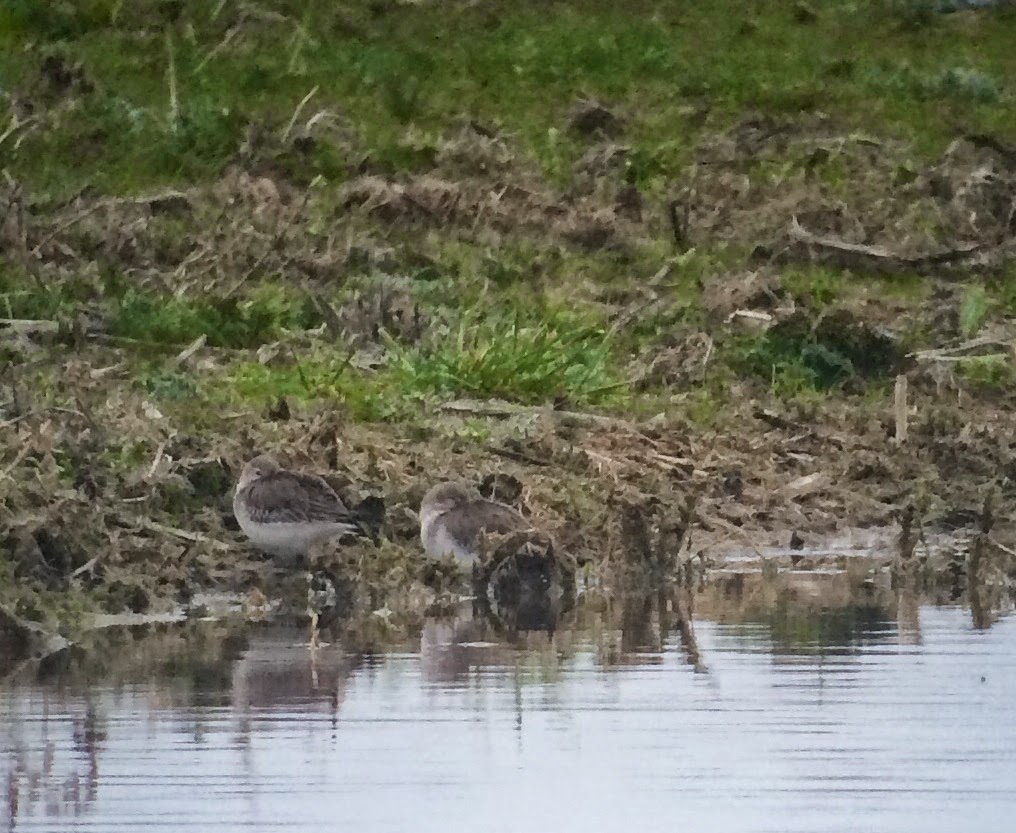 As you can see, there's a Brambling there. 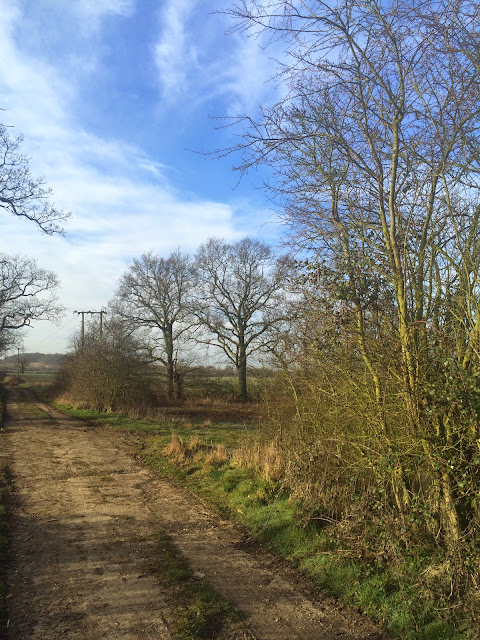 These two were new at a well watched site, so assume there is a passage on.  Anyway, an all-important "1" on the spreadsheet. 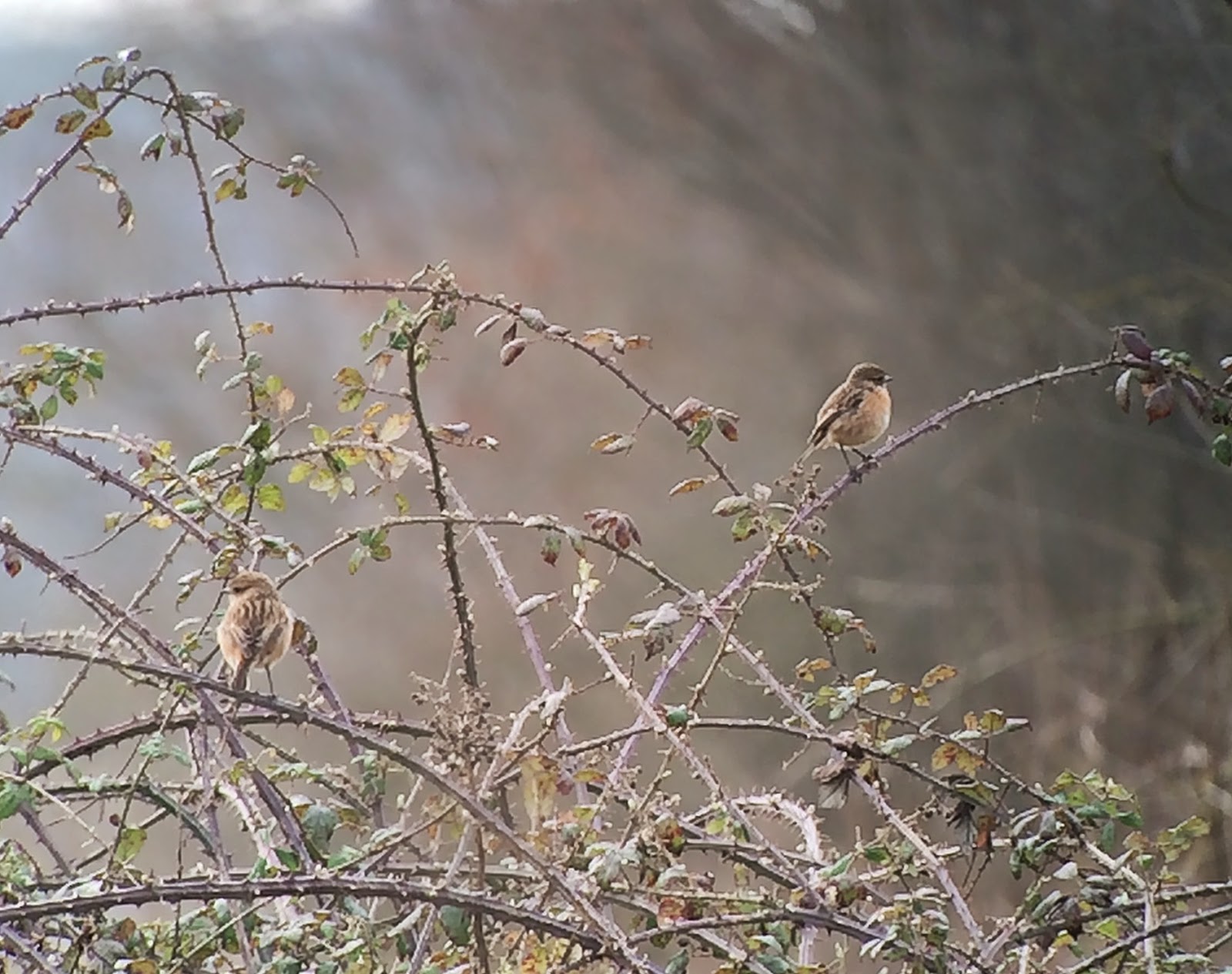 Lesser Spotted in more ways than one, did not see one at all in 2012 or 2014. Returning to the site of finds in 2011 and 2013, this female eventually gave herself up around the southern part of Flitwick Moor in the sunshine and breeze this morning after about two hours around the site and adjacent area. Did not get any redpoll sp or Siskin at this usually very reliable location. 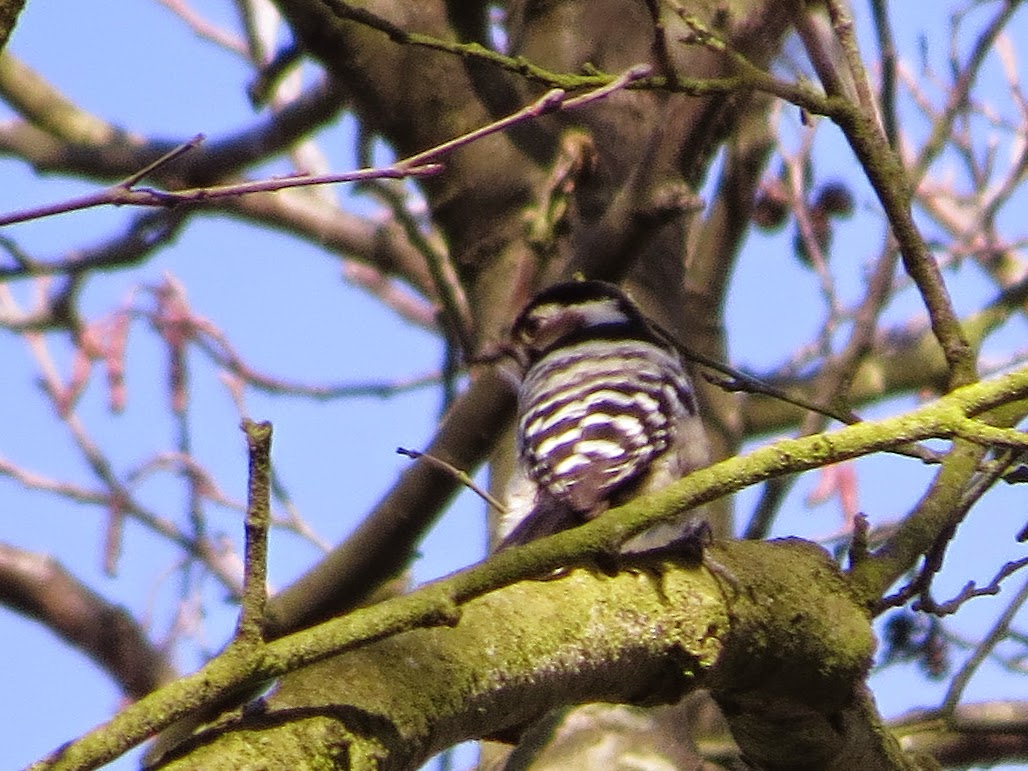 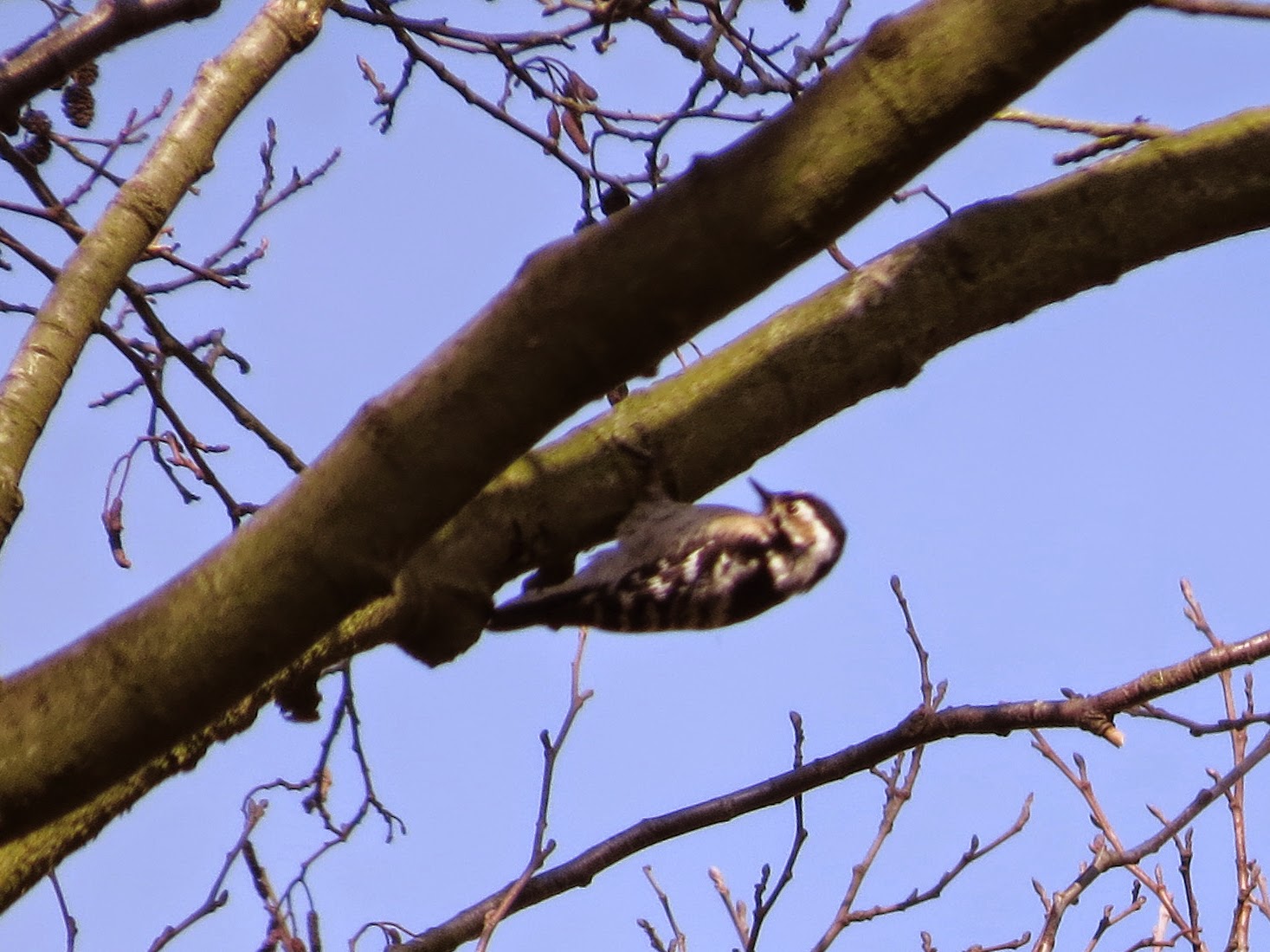 New for my SFYL this evening. 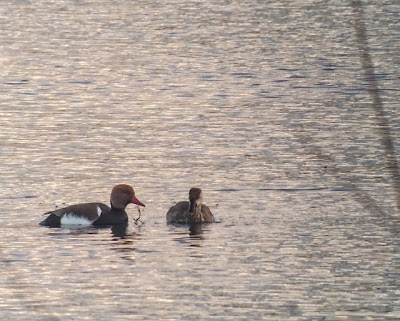