Hanging around in the mid 60s is not an impressive self found total for one month in. Let's see what February brings.
Posted by Unknown at 20:47 3 comments:

Despite the crap weather this week I've managed to extract a couple of nice ones - first was a Merlin which shot over the bonnet of my car just sound of Blunham Lake, then gave excellent views sat in the fields, before heading off towards Southmills.  There was nothing very much on the lake though!

The second 'useful' year tick was a Curlew this lunchtime.  I was on my way to pick up Darren from GLE and thought I'd pop in and look for Mr Merlin on GLW.  I knew Darren had been there just 40 minutes before, but you never know, eh?  I pulled up, had a quick scan for the Merlin - no sign, then noticed a lump on the edge of the big puddle.  Bins up - Curlew!  A quick call to Darren and it secured it on his year list too.  Nice of him to save it for me to find...
Posted by Steve Blain at 16:52 2 comments:

Steve laughed heartily when I told him this, and insisted that I post it here, when I jokingly mentioned that self-finding was first mentioned in The Bible. I assure you this was original, spontaneous and carries with it not a whiff of plagiarism (try Googling it if you don't believe me).

We have all heard the story of the Last Supper; Jesus and the Apostles at the Garden of Gethsemane etc. The Book of Matthew relates how one of the disciples - it may have been Judas Escariot, I know not - said to Jesus ''Lord, I fear I have lost my way, I have lost my faith - how can I re-find it?''

Actually, this is a load of old bollocks. What Judas actually said was ''JC, my man! I'm doing a Disputed Territories Self-found Year List and I'll be damned if I can find Palestinian Sunbird.''

Jesus replied ''Judas, my son...seek and ye shall find - on the road from Gethsemane to Calvary. And be careful what you wish for, it may well come to pass...''

Nine hours and 18 miles in the field this weekend and bugger all to show for it apart from an aching thigh. Unable to [zero-carbon] self-find Golden Plover, Barn Owl and Crossbill and I can't find a Pochard within walking distance...which, realistically, are the easier species I have left to go for this month. Anything else would be a bonus/ surprise/ stroke of luck.

And we still have February to come, which in birding terms isn't so much a month as a state of mind.

How are we treating Cetti's Warbler at 'known/ traditional sites?' Contentious...

I have passed three BirdTrack milestones this week however: 40,000 total records, 1,000 total lists and 1,000 records for 2014. Not a bad dataset is developing, although I'm not quite sure what I'm going to do with it.

A brief visit to Dunstable SF this morning produced a newly
arrived Shelduck. These can be difficult to find in the deep south.
Actually just looking at my photo has just reminded me that I'm
in need of a haircut. 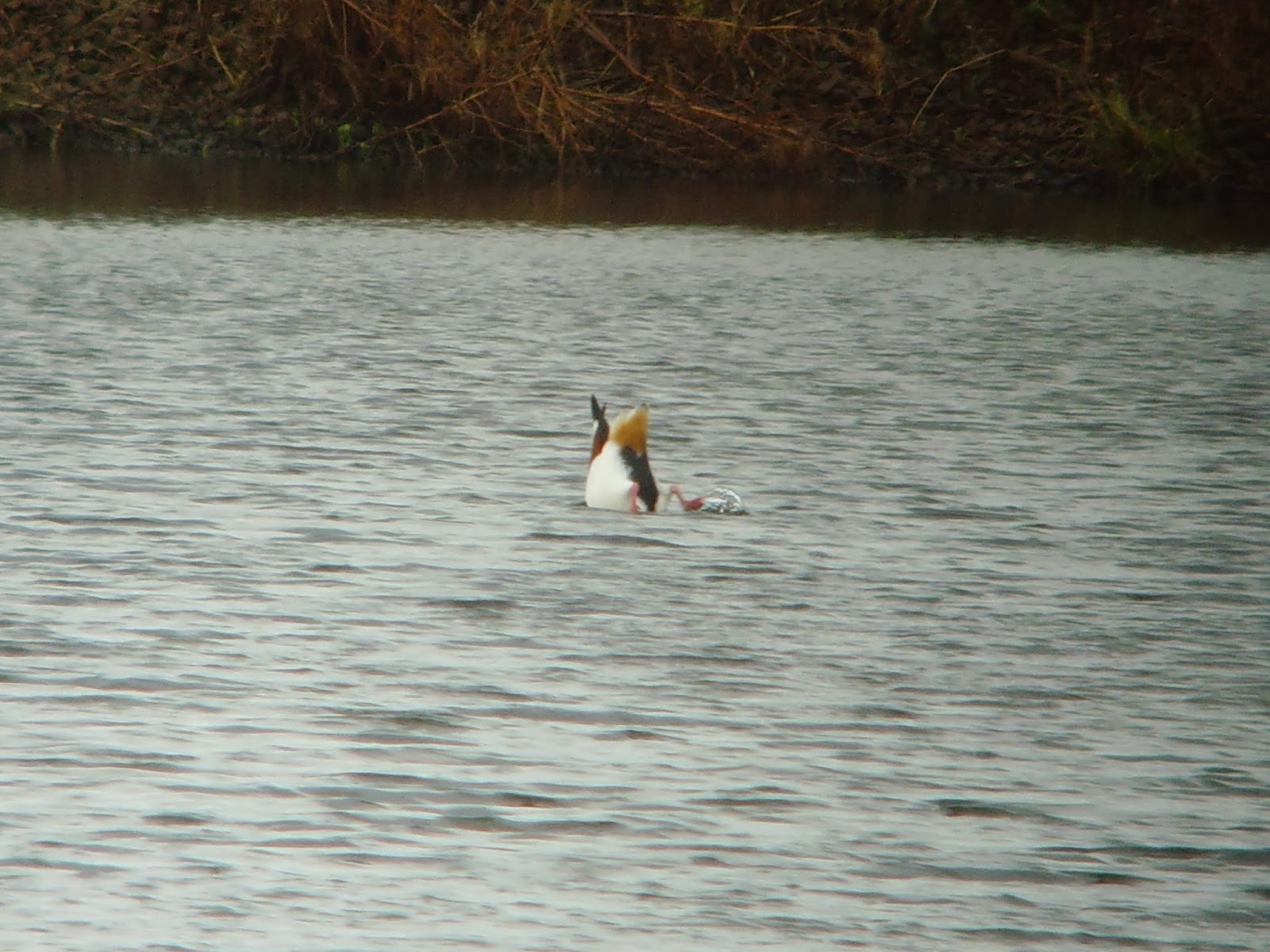 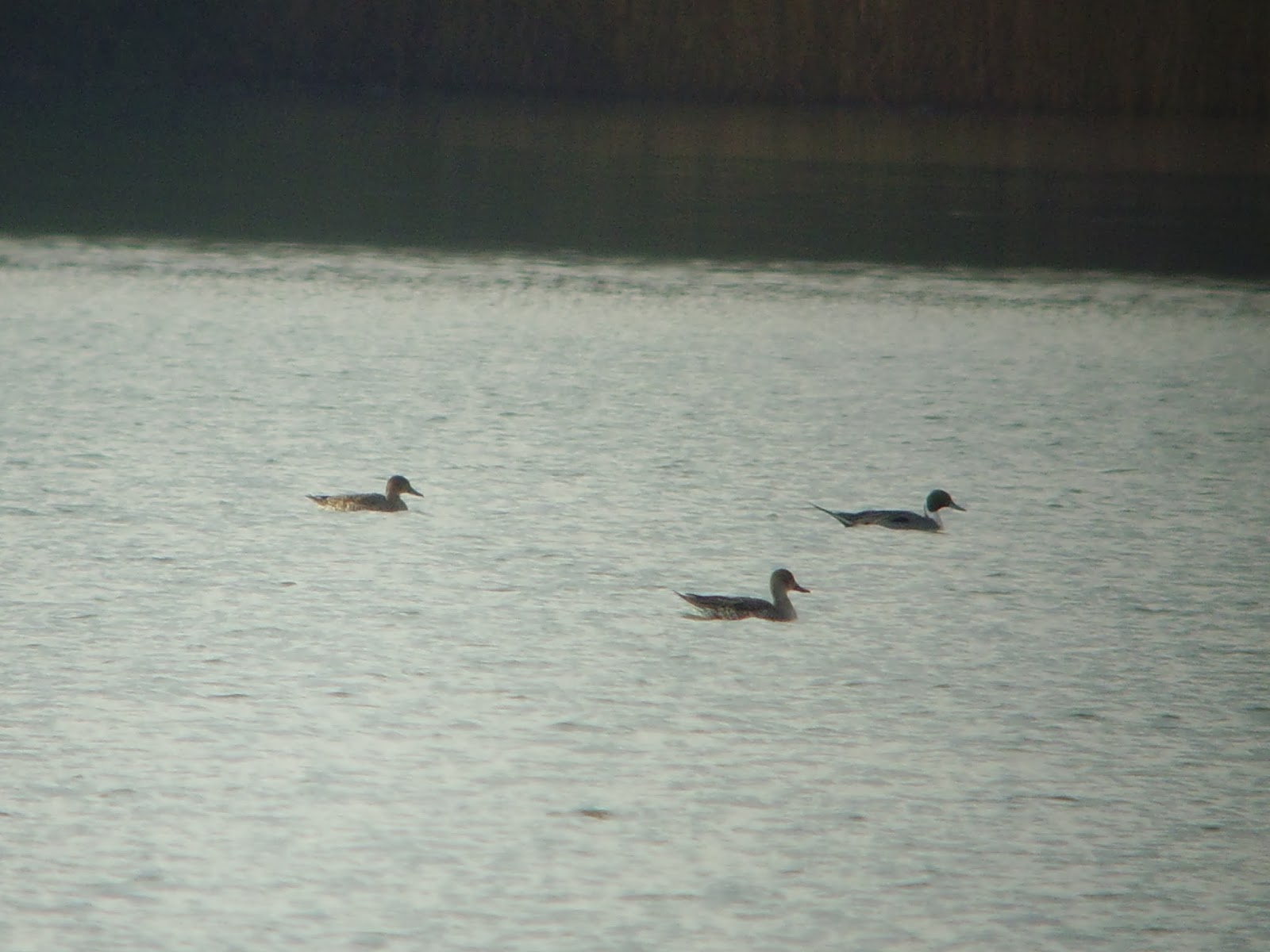 Being ahead of schedule while heading south on the M1, I thought
I'd take a look over Brog Lake to see if the overnight fog had brought
anything in. In the s/east corner were 46 Wigeon (the most I have
seen there) and amongst them were 5 Pintail (3m). Coincidentally
stopping at Dunstable Sewage Farm later in the day produced 3 more
Pintail (1m)

Well, my first post of the new year and the pressure is already being piled on by the main protagonists. Tales of Scaup, Owls and Cetti's have certainly sparked me into action. So a week or so back, I dusted of my trusty ecosteed and once more started to SFYL.
2 Snipe sp. and Shelduck have been barely notable as I anticipate better fare............
And then it came!
Is it? Isn't it.............surely not,.......er, yes it is!
So after I told the world about my first ever SF Slav, I brought myself back to earth again.
A long ride round the lake to see Mark T and Jim G (who had rushed to Broom on my account) to say:

"Er, sorry lads- I might have got a bit excited there" 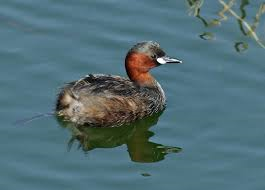 This morning, my plan was to leave home at 06:15, in order to arrive at the Ivel Valley for dawn. On my way, a pair of Tawny Owls duetting from a copse at Oak Farm was a splendid way to start my day.

Things were predictably slow at the New Road Workings; a couple of Snipe, but no sight nor sound of the Cetti's. I did manage to convert Wigeon into a zero-carbon tick.

Next, to Warren Villas and the fog descended - visibility was now no more than 50m. On the western side of the nature reserve, I was surprised to hear a Cetti's give a single explosive phrase of song. During 2013, I had CW on six occasions at New Road - always in the same reedbed. This, however, was about 0.5m away on the far side of Warren Villas. The same bird? Well I can't be sure. Strictly speaking, the situation is no different to the Marston Vale birds that people have been ticking, but:

Until I hear a bird at New Road then a bird at Warren Villas shortly afterwards, it stays out.

After converting Teal to a zero-carbon tick, met up with Richard and we had a look at Broom. No rare grebes, but a flock of Shoveler were my first of the year (Steve and I managed to avoid Shoveler during the entire duration of the duck hunt!) However, I can't tick these either because others have already done so. 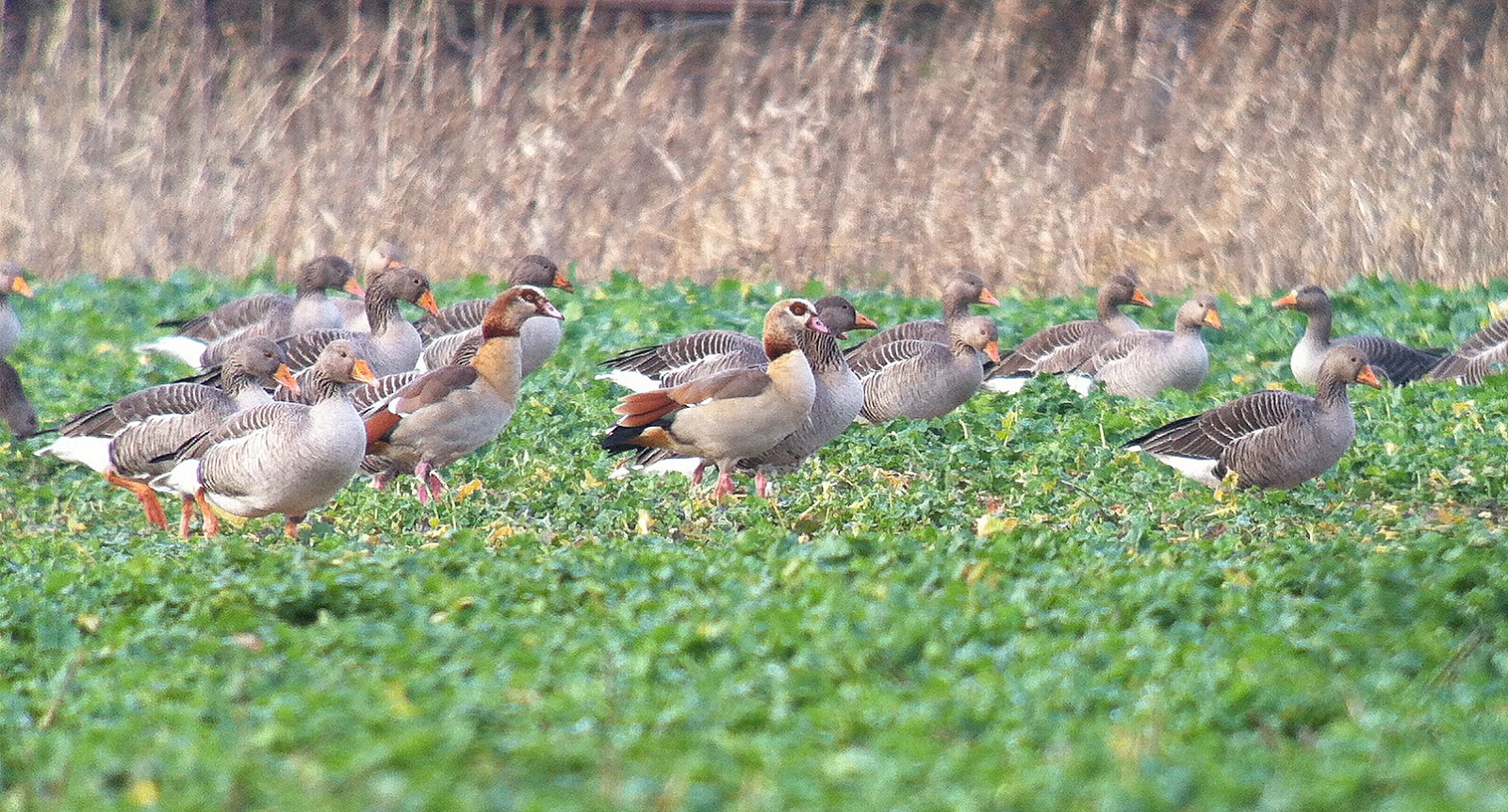 Two of three Egyptian Geese at Radwell today.  Five hours in the field today gives me a SFYL worth posting, so I must find that spreadsheet.

Not found anything to shout about so far this year so was most surprised to kick off with this in Luton's Wardown Park. Fully winged in flight and no rings, this bird was associating with Canadas and a few Greylag in the largest count I have made of geese at this site since I started WEBSing it in 2008. It's on my list. 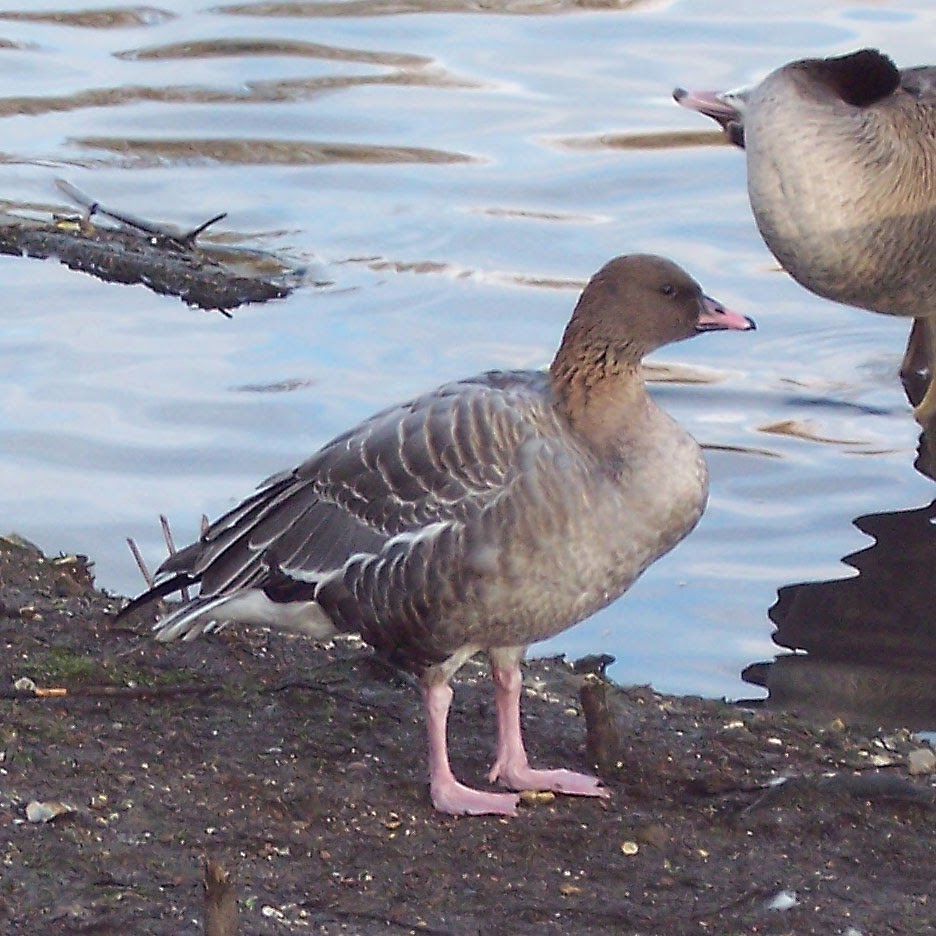 Pinkie with no jewellery 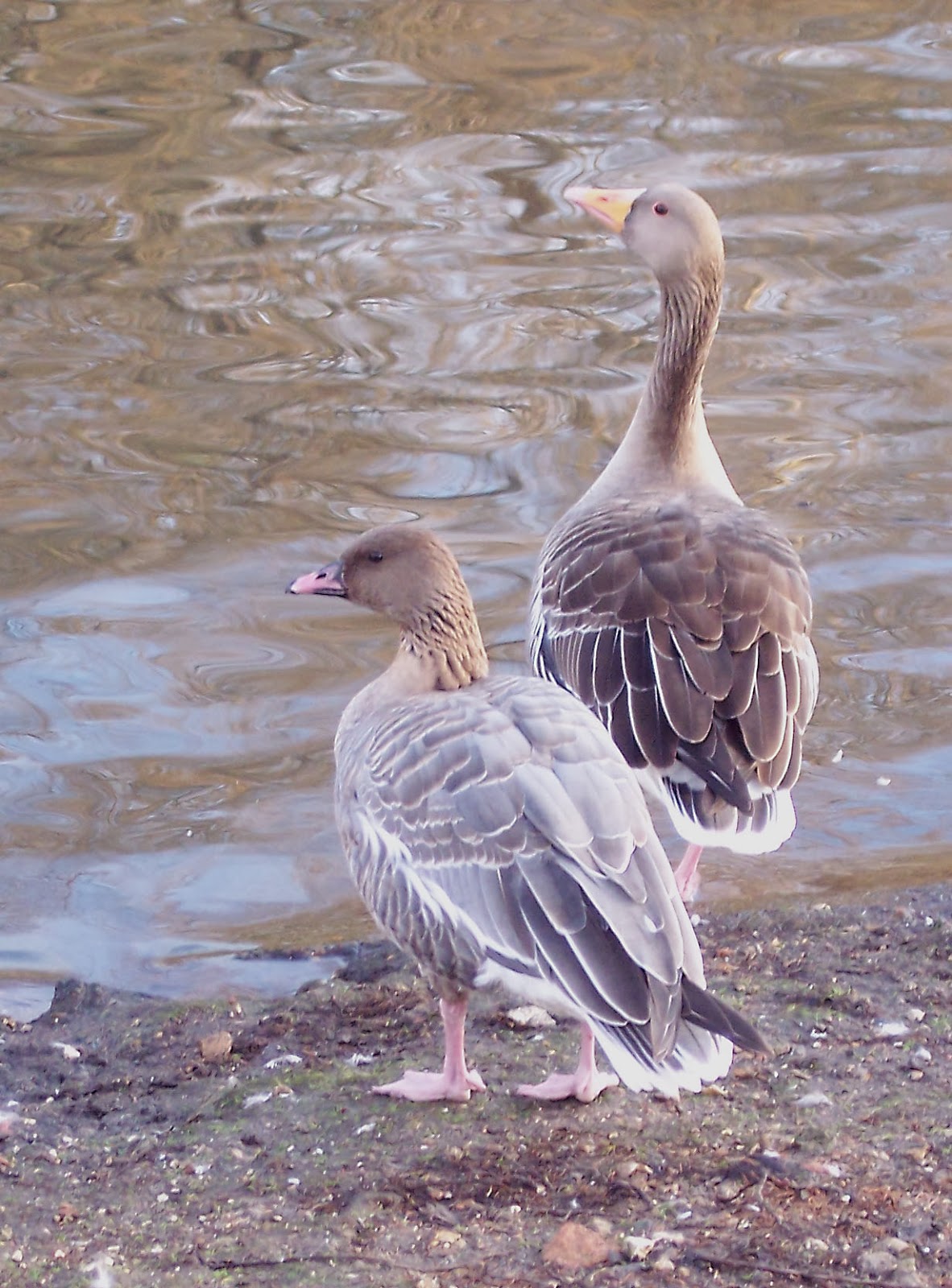 Pinkie with Greylag and lots of wing feathers 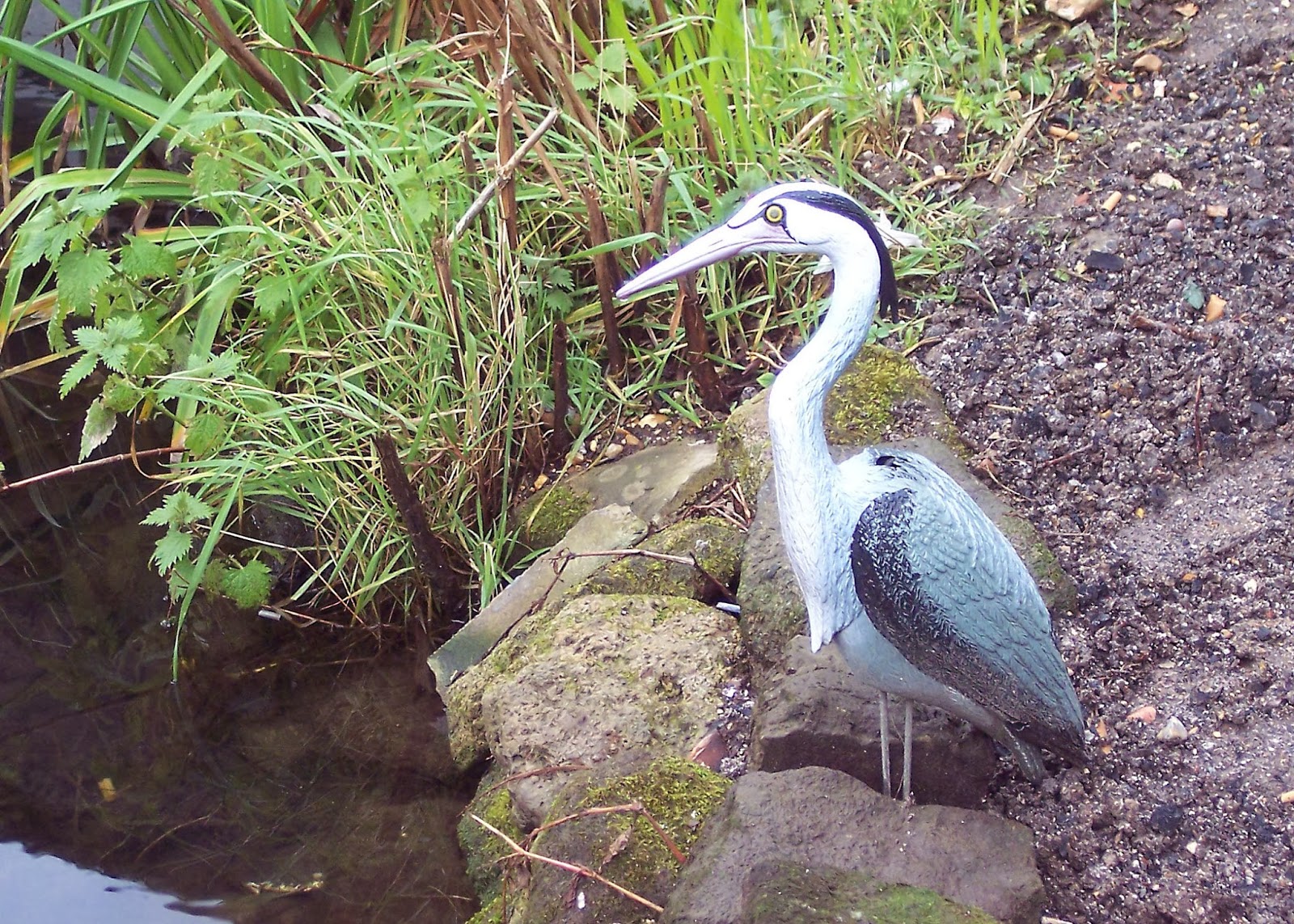 Four SFYT's this morning from the Tetworth Estate; from the sublime - Merlin, to the ridiculous - Feral Pigeon. Also, an amazing 82+ Snipe, with at least one Jack Snipe amongst them, although at times it was difficult to keep up, as there were so many birds in the air at once. I was surprised that no Teal were present, (there were 60+ late last year), although this does seem consistent with events elsewhere - wildfowl have just 'gone.' [Edit- just had an email from the Estate Manager, who tells me he hasn't seen any Teal for three weeks.]

This seems a little counter-intuitive - they were present before the New Year and generally it has been mild, so what has prompted this wildfowl exodus?

Slow going but this week I've added Scaup at Blunham and a Woodcock half an hour ago from my office window. That's at least three now.
Posted by Steve Blain at 16:55 1 comment:

Darren's total in particular is spectacular - very well done to him.