‘’He’s so excited, he’s like a coked-up Meerkat on an electric fence.’’ 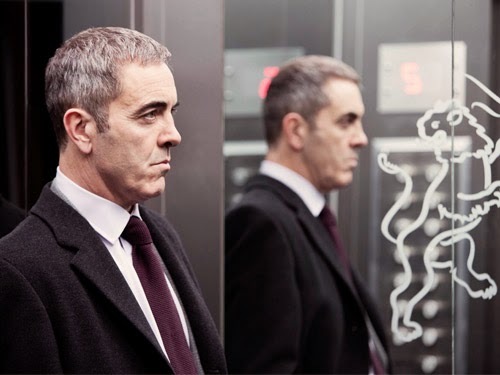 The awards were held at Travelodge Marston Moretaine, in front of a boisterous audience of between eight and nine people - who had mistakenly attended - and Stephen Northwood, a vagrant, who wandered in because he couldn’t remember where he’d left his bike.

Accepting the award, Mr Blain commented ‘’Thank you James, I am truly honoured to have beaten my less than prestigious... or should that be prodigious?...opposition this year, and picking up this award.’’

He continued, ‘’some time during early-April next year, I am planning to pay a gang of Albanians to track down my fellow competitors, kidnap them all, then strip them naked, nail their bollocks to a wall, and spin them round continuously – sort of like human Catherine Wheels, if you like - until Spring passage finishes in June. ‘’ That’ll put paid to any thoughts they have of bagging a spawny southern overshoot. The bastards’’

Amongst the audience of A-list and 1st-division birders, was Leonard Godiva Rasputin Heavens, Chief Executive Listmaster of the UK Flying Objects Association.  He declared ‘’Steve has been chiefly responsible for me having recorded 183 species in the English County of Bedfordshire during 2014, including Eurasian Western Pink-legged Reed Warbler, which has now been admitted to the UK400 Official List as a full species, after thorough consultation with my elite committee of easily-swayed and impressionable young birders who are desperate for new UK ticks and half-pints of snakebite.’’ ''Personally, all I found this year was a rather damp copy of Penthouse in a layby at Brogborough and a shivering, hyperthermic Andy Grimsey at Pegsdon Hills.''

Also present was Martin Palmer - veteran local birder and self-findist - who lives in a hobbit hole on the edge of Stewartby Lake. Trimming his beard with the sharpened offshoot from a nearby willow, he said ‘’I have known Steve since we was six, and he fully deserves the recognition we won’t be giving him.’’ He continued, ‘’but we’ll see how big his balls are when a tricky 2cy Baltic Gull turns up at dusk on a damp February evening from my veg patch.’’

Also present was José Mourinho, Honorary President of the Bedfordshire Self-finding Committee. He belicosed ‘’for me, Steve has demonstrated the qualities I like in my players: big character, big ambition, big list, big cahunas. He reminds me a bit of John Terry, but unlike JT, he possesses high-end optics and and an i-Phone and lacks John’s blood-soaked head bandage and extra-marital affairs. If he wants to up his game another notch and be considered one of the all-time greats, he will have to acquire a serious head injury and start knocking off at least one of his competitors’ wives during 2015.’’

Richard Bashford, who came outside the top three for the first time since 1973, graciously observed to a transfixed crowd - ‘’I have enjoyed some truly memorable birding moments with Steve this year ‘’Lapwing at Broom, Dunlin at Broom, Chicken Sandwich at Sainsbury’s – the banter has been incredible. Ideally, I would like to relate to you some of the many anecdotes and bloke-moments that have passed between us, but unfortunately, half of it isn’t fit to repeat...and the other half isn’t fit to think.’’

John Lynch - a man of few words, but great deeds - from Grovebury Sand Castle, near Leighton Buzzard, rounded off the evening, and brought the house down with his closing comment - ‘’finding the Barred Warbler at Blows was definitely, definitely, my Ulrika moment. ‘’ he Freudian-slipped.
Posted by Darren at 17:05