After Matt's Oystercatcher at GLE the other day (still there but on GLW today), an increase in Ringed Plover numbers and then an internet report of a Wheatear in Essex yesterday I thought an early morning jaunt to the Broom area may be worth a punt. I did get there a bit earlier than planned but this was due to one of the dogs deciding that it's a waste of a day to be in bed beyond 0500, so I'd really only taken the dogs down there to knacker them out a bit.

Wandered about for a while tripping over rabbits with myxomatosis (an abomination of a human development), with the highlights being c100 Golden Plover wheeling around and was just about to head for the car when my day-dreaming was interrupted by a calling Curlew. It was pretty hard to locate at first but this was due to it being high up and drifting in a fairly large loop over both GLE and GLW. I wonder how many other "decent" birds are missed if they do the same but don't call, otherwise I'd never have seen it?

Anyway, I'll happily admit that I'm now going to be out and about with a bit more enthusiasm and hope that something decent will turn up, as it appears that things are a couple of weeks early compared to the norm. 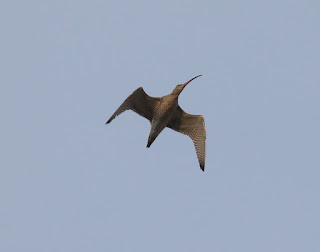