Chewing the fat with Andy Jackson at GLE, Broom GPs, when these suddenly appeared in the far corner from nowhere. After a bit of deliberation, and a lot of self doubt between us (due to being a bit early etc), we were pretty happy to start putting these out as Wood Sands but it was still good to quickly get a fresh set of eyes and agreement from Stu W to confirm.

The water levels at GLE have dropped considerably, which means birds can be tucked away in various nooks and crannies without showing, unless disturbed, or moving about to feed like these did.

Juvenile Cuckoo also floating about on the GLW side but no sign of the Whinchat by Peacock's Lake from yesterday. 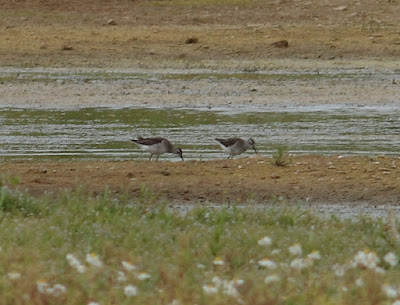