A boost from Broom

Self found ticks should prove easy enough over the next few weeks as the new migrants come in. I got my first with a Wheatear at Broom while searching for a certain teal sp. The key to the contest is however to get the scarcities. One example is Peregrine that is around most of the time but difficult to count as a self found for the year. Sightings are irregular away from the known locations such as Stewartby chimneys so I was delighted to score with a bird that came down to drink on the pools at on Saturday morning. I also got a bonus this weekend as this was my first visit to gravel pit habitat since the first few days of the year so I was able to add SFYTs in the shape of Redshank, Oystercatcher and Ringed Plover to give my total an extra boost.

Later in the day, a Green Sandpiper was discovered on the man-made plastic-lined pools between Toddington Services and the railway giving me a total of seven different wader species for the day. Still not found Stonechat however which was one of the key targets of my late afternoon wanderings in the Sundon area.

Have not had a chance to add anything else yet this week but the weekend will soon be upon us again thankfully, then the longer lighter evenings.

Not counting this duck from , . Not only is it an escape but it is some sort of hybrid in which I am finding it difficult to be confident in naming species that may be included in its ancestry. If I knew the answer this would make a good competition photo but I reckon a certain amount of Ruddy Shelduck may be in there somewhere… 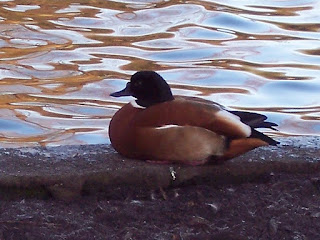 Email ThisBlogThis!Share to TwitterShare to FacebookShare to Pinterest
Labels: Dodgy