Having gotten up later than a late thing this morning, I eventually got to Stewartby Lake at 11.45 where it was of no surprise to find that Keith Owen's 2 Kittiwakes had already moved through (unmedically speaking), however his summer plumage Sanderling was still along the concrete slipway by the sailing club, albeit only for a few minutes as, when I looked for it again about noon, it was not to be seen and thereafter both children and boats arrived!!
At noon, I was scanning the lake to be certain that the Kittys had definitely gone and had only seen a distant single Black-headed Gull and a Common Tern resting on a closish buoy when I heard a tern calling - but what a treat! Eric had arrived!!
I reverted to bins and quickly found not one but three Sandwich Terns flying about in the nearest quadrant of the lake to by position toward the level crossing, east corner end of Green Lane along the north-east shoreline. They appeared to be a pair and a single as the two kept apart from the third bird and landed on a mid-lake buoy together. I promptly 'phoned the news out - it was 12.05. Sandwiches for Lunch indeed!!
One of the birds seemed to have gone within ten minutes but two were still present when I'd relocated to the breaker's yard, north corner. This "pair" then moved off as well and had gone by 12.23. I took this photograph, the best of a few taken, at 2x thro' my 32x 'scope lens and then blew the resultant shot up rather a lot more on the computer. Even at the near kilometre distance snapped, the large size, shaggy black cap, black legs, white body and long "dipped in butter" black bill are all clearly evident.....honest!
Later, I enjoyed further views of the long-staying Slav Grebe in the same 'scope view as the recent drake Common Scoter. The Nightingale sang sporadically at the north corner but my singing Lesser Whitethroat and Garden Warbler of recent days were far easier to see. At 2.15 with TP, LC and BC, I enjoyed nice close views of the Turnstone found at Millbrook Pillinge a little earlier by DHB, then it was back for another half hour or so at Stewartby. 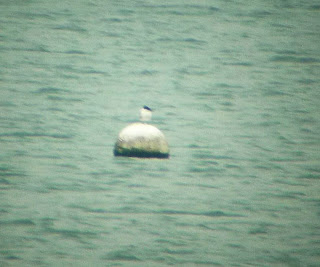 Posted by Richard Bashford at 21:35