Can I play please ?

Thought I should put my hat in the ring for this one, though I will not be near the top of the quantity list due to limited time and easy access to wetlands. I’ll start in the Top 5 though with 86 BSFYL12 applicable species.

I’m going for quality again (?) this year, rather than quantity, as I am sure to be doing majority of birding in the southern fields and hills. Will be hitting the wetlands of course when a study of the weather patterns or presence of a particular bird will draw me in.

Not starting with any strong claims on scarcities, so cannot have Scaup, Smew, Scoter, GN Diver, Crossbill, Short-eared Owl, Tree Sparrow or any of the scarcer geese as they were all well publicised birds. Also only got Mandarin, Goosander and Jack Snipe from regular wintering sites that I went to in order to find these species though I might make a late claim on Goosander from East Hyde that I did bump into when I went to photograph Jacks as I had forgotten about them after the initial news. Only twitch this year was to get Steve’s tristis Chiffchaff. I have claimed the surprise of two male RC Pochards when looking for the Scaup at Brogborough on 6th Jan though and will not be denied Raven over Pegsdon by some quirk of the rules.

My wintering garden Blackcaps are mine all mine and I will not be publishing the Dusky Thrush until it has departed as my wife does not want “my wierdo twitcher mates” interrupting her efforts in the kitchen... 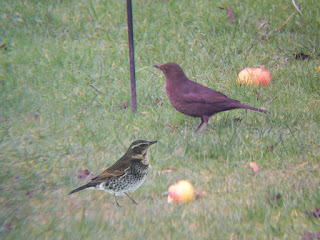